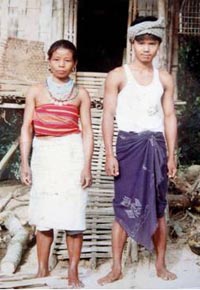 Chaimal is a smallest tribal group of Tripura. As per 2011 Census, their total population is only 549 persons. Their main concentration is at Ambassa of Dhalai District. They call themselves as "Saimar".
Chaimals belong to the Cocaso-Mongoloid origin. They speak in a language originated from Kuki-Chin group of language. Chaimal language has no difference with that of Halams. They can understand and speak Kok-Borok, Chaimal live on Jhum cultivation as well use plain land cultivation.
They are Hindus and follow all rites and rituals as per Hindu customs. Due to modern weave of life, some literate persons of this community have taken Christianity as their religion. Like other tribes, they have separate form of dance, folk songs and music though performances are very occasional.