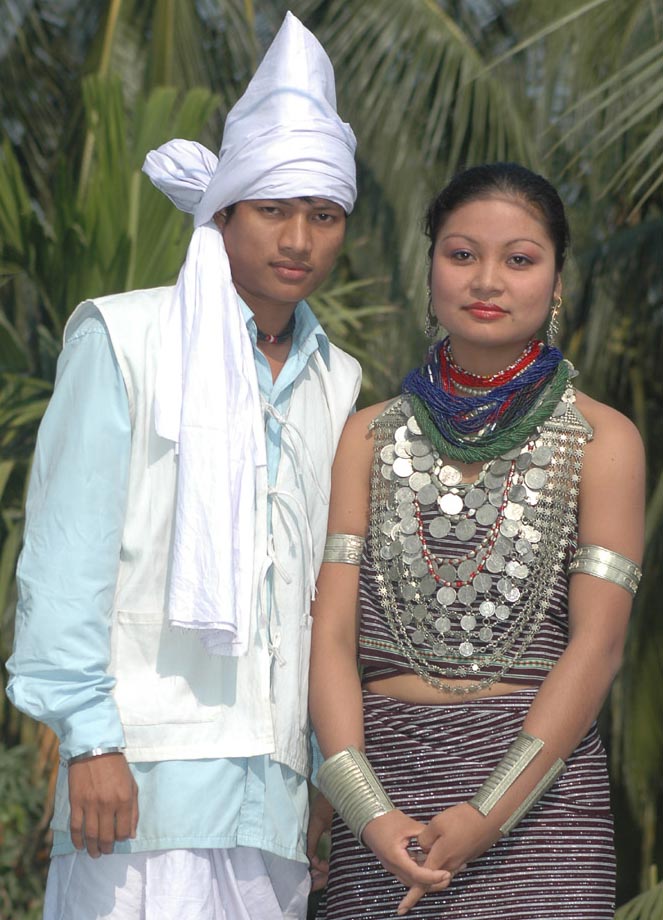 Reang are the second largest tribal community of Tripura. They are recognized as one of the 75 primitive tribes in India. Numerically as per 2011 Census they are 1,88,220 persons in this State. Reangs are said to have come first from Shan State of upper Burma (now Myanmar) in different waves to the Chittagang Hill Tracts and then to Southern part of Tripura. Similarly another group entered Tripura via Assam and Mizoram during 18th Century.
Reangs belongs to Indo-Mongoloid racial stock. Their languages has affinity of Austro-Asiatic groups under Tibeto-Burman family. Ethnically Reangs are divided into 2(two) major clans (i) Meska and (ii) Molsoi. Their language is known as “Kaubru” which have a tonal effect of Kuki language though broadly it is Kok-Borok dialect.
Reangs are still a nomadic tribe and a large numbers among them maintain their livelihood involving Hilltop Jhum Cultivation and other food gathering activities like collection of jungle fruits, leaf, plants, fishing in stagnant water in hill slopes, hunting of wild animals and birds etc. Reangs have faith on different deities like Buraha, Bonirao, Songragma, Jampira, Lampra etc. There are also some female deities like Mwtaikotorma, Tuibuma, Mailoma, Ganga etc. Reangs believe in spirits and existence of soul. By religion they are Hindus and most of their deities are akin to gods and goddesses of Hindu faith. Among Reangs followers of Vaishnavism are found in good numbers.
Reangs traditionally are endogamous and do not marry outside their community. The village council chief is known as “RAI” permits Divorce and Widow marriage. They cremate their dead bedside a river or chara after observing series of rites and rituals and funeral procession.
Reangs’ folk life & culture have outstanding cultural components. Hozagiri dance with melodious tune of flute is most attractive throughout the country and abroad.
Due to social transition and modern wave of life, considerable changes could be seen among Reangs in the field of agriculture and other economic activities, social and cultural life, awareness for education, health and sanitation etc. So Reangs are now an aware and progressive tribe of Tripura.