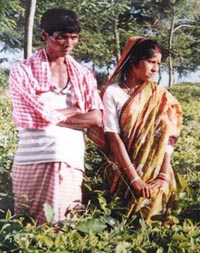 Santals are among the immigrant tribes in Tripura. They belong to Austro-Asiatic racial stock. Their original homelands are in west Bengal, Bihar and Madhya Pradesh. They have migrated to this state as Tea garden labourers. As per 2011 Census Santals are only 2,913 persons in Tripura. They mainly concentrated in Simna and Mechliban Tea Garden areas of Sadar Sub-Division and other places in the State. Their main occupation is to work in Tea garden area.
They are Hindus by religion and followers of Shakti-Cult. Holi is their main festival when they enjoy Haria (one sort of country liquor) and dance in-group with the melody of drum and sing-their traditional songs. Beside Santals have animistic faith being handed down from generation to generation. They have their priest who acts as religious head. Among them influence of Christianity is also not out of place.
Agriculture and Hunting of wild animals sustain their additional food requirement. In fact most of them do not have land. Land usually allotted by Tea garden owner outside the garden generally cultivated by them to produce paddy and vegetable.
Santals cremate their dead. The Christian Santals burry the dead. In case of death due to incurable diseases, accidental death or pre-mature death, bodies are buried. After cremation, bones and ash are brought in a grove over which a stone slave is placed in the memory of the deceased.The Santals are peace-loving tribe and live together with other communities in a peaceful co-existence.